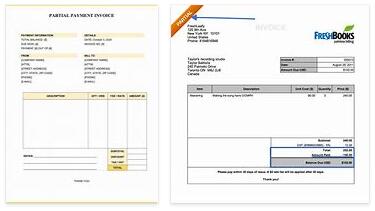 In many companies, invoices for large orders are not sent in one sum. You create several advance payment invoices. Part-time invoices have advantages for the company but also for the recipient: They do not have to be paid in large amounts and the company that provides the service gets money to work with more quickly.

What is an advance invoice

An advance invoice can be created for many purposes. In a construction company, partial invoices can be issued because a construction project extends over a long period of time. Even when manufacturing very expensive goods, such as systems, you can create advance payment invoices. Part-time invoices can also be made for long-term benefits in kind, for example for monthly payments for the supply of electricity or gas. A down payment invoice can be issued for construction work, but also for various other services. For this you will find our free deposit invoice sample for download. The customer pays a deposit and can make further partial payments before the final invoice is issued. In most cases, it is contractually agreed whether advance payment invoices will be issued and after which period they will be issued. The due date for the partial invoice is usually 30 days, but in the case of a longer-term contract, such as the supply of electricity, the invoices can also be due after a shorter period of time.

With an advance invoice, a fee is paid to the obligee, just like with any other invoice. The purpose of such a partial invoice is to keep the burden on the creditor and the debtor lower. The creditor can use the advance invoice to pre-finance his services, which means that the risk of insolvency is lower. The financial burden is also lower for the debtor, he can also be protected against bankruptcy in this way, as he often does not have enough financial resources to pay the bill in full. According to the legal system in the German Civil Code, partial invoices should only be the exception. The debtor may only make payments on account and the obligee may only demand them if this is regulated by a legal provision. The German Civil Code provides for partial invoices for work contracts, as otherwise the remuneration would only be paid upon acceptance. Advance payments are made for parts of a work that have already been performed; these are not advance payments.

Elements of an advance invoice

An advance invoice must be structured in the same way as a conventional invoice . It must contain the following elements:

In addition, it must contain the value of the service as a gross amount as well as the tax rate, the tax amount and the gross amount. The payment term must be listed on the invoice, and the invoice must also be marked as a partial invoice. It must be specified which advance invoice is involved (e.g. advance invoice 1). If the service has not yet been provided, the future delivery time must be specified.

In the case of construction work or work, the partial invoice can indicate which deductions have already been calculated and whether they have been paid. The deductions are usually always calculated in the same amount, at the end, when the full service has been provided, the final invoice is issued . In the final invoice, the partial payments already invoiced are deducted from the total amount. It is marked as such and can be higher or lower than the advance invoices.

Amount of the partial invoice

In general, there is freedom of contract, which is why customers and entrepreneurs usually clarify in advance which advance payments should be made and in what amount. At this point, the negotiating skills of you as an entrepreneur are particularly important when it comes to agreeing the advance payments, as there are no legal regulations as to how many advance payments can be made. The time at which an advance payment is created is also selected internally in consultation between the customer and the company. A first partial payment or an advance payment after the contract has been awarded is more common, especially with freelancers and freelancers.

The most common mistakes in progress invoices