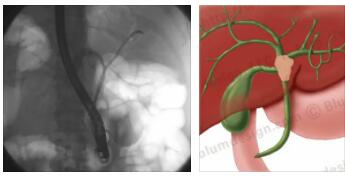 The Klatskin tumor is one of the bile duct carcinomas. It is considered a special form of cholangiocellular carcinoma.

What is a Klatskin tumor?

A Klatskin tumor lies in the bile ducts.

Klatskin ‘s tumor is a malignant tumor that forms in the central bile ducts. It represents a special variant of bile duct carcinoma. The Klatskin tumor is positioned at the hepatic fork. At this point, the right and left hepatic ducts come together to form a common duct. In medicine, the tumor is also called carcinoma of the hepatic fork or bifurcation carcinoma. People between the ages of 60 and 70 are particularly affected by a Klatskin tumor. See AbbreviationFinder for abbreviations related to Klatskin Tumor.

The Klatskin tumor is counted among the cholangiocellular carcinomas, the causes of which are still unclear. For this reason, no precise trigger for the development of the rare disease has yet been found. However, certain risk factors are known that can favor the occurrence of a Klatskin tumor. These include previous illnesses such as gallstones in the liver (hepatolithiasis), primary sclerosing cholangitis, Caroli syndrome and a choledochal cyst.

Another risk factor is infections with parasites such as Clonorchis sinensis and Opisthorchis viverrini. These diseases primarily occur in China and Thailand. Doctors divide the Klatskin tumor into two forms. These are the polypoid intraluminal type and the diffuse infiltrating type. Both forms have the potential to merge into one another. They infect the liver along the bile ducts.

In about half of all malignancies, metastases in the lymph nodes can also be identified at the time of diagnosis. The Klatskin tumor infiltrates the perineural sheaths at an early stage, which can happen as far as the periortal nerve plexus. Since the spread of the tumor can only be recorded with difficulty using imaging examination methods, only a histological examination reveals its extent.

The Klatskin tumor is also subdivided into types I to IV. In type I, the hepatic fork is unaffected by the carcinoma that forms on the bile ducts. If, on the other hand, the hepatic fork is involved, it is called type II. In the case of type III, the tumor reaches the segmental origins on one side. If type IV is present, the secondary confluences on the right and left side are affected. A curative resection can then no longer be carried out.

In most cases, the patient does not even notice the development of a Klatskin tumor. Symptoms only arise when the tumor increases in size. Then the gallbladder enlarges below the right rib, which is painless. Those affected also suffer from severe jaundice (icterus). In most cases there is also a greater loss of weight.

Other symptoms can be itching and fatty stool (steatorrhea). In addition, the Klatskin tumor penetrates into the liver. As the disease progresses, upper abdominal discomfort, loss of appetite and tiredness occur. Jaundice, which sets in early, is caused by a blockage in the bile ducts. This disrupts the outflow of the bile pigment bilirubin.

The absence of bile acid in the intestine means that fatty acids and trialcylglycerides do not undergo conjugation. In addition, they can no longer be split and absorbed by the lipases. Because they remain within the intestinal lumen, the stool becomes fatty.

Several examination methods are suitable for diagnosing a Klatskin tumor. This is usually a blood test for changes in bile and liver values. In addition, an abdominal sonography (ultrasound examination of the abdomen) takes place. As part of an X-ray examination, the patient takes a contrast agent beforehand to make the bile ducts visible.

In this way, narrowing of the bile ducts caused by a tumor can be identified. Magnetic resonance cholangiopancreaticography (MRCP) can also be used to visualize tumor stenosis. There is no risk of introducing germs through a contrast medium. However, the full extent of the Klatskin tumor cannot be shown using imaging methods because it spreads to the nerve sheaths. However, its core area is usually well recognized.

A Klatskin tumor often takes a negative course. It has usually grown so much by the time it is diagnosed that an operation can no longer be carried out. For this reason, life expectancy with this disease is considered low. Only about five percent of all patients are alive five years after diagnosis.

Because Klatskin’s tumor is a cancer, it comes with the usual complications and risks associated with cancer. In an unfavorable case or if treatment is initiated late, this tumor can already spread to other regions of the body and thus affect other healthy tissue. This can usually lead to a reduced life expectancy.

In the worst case, the patient dies as a result of the tumor. It is not uncommon for Klatskin tumors to cause jaundice and severe weight loss. In many cases, those affected also suffer from abdominal pain and loss of appetite. Deficiency symptoms and a fatty stool continue to occur. The quality of life of those affected is significantly restricted by the Klatskin tumor and their resilience also falls sharply.

The tumor can be diagnosed relatively easily, so that treatment can be initiated at an early stage. However, the tumor cannot always be successfully treated and removed. It is removed surgically and then by radiation. In most cases, the affected person is also dependent on check-ups after the treatment. In some cases, life expectancy can be reduced by the Klatskin tumor.

When should you go to the doctor?

If symptoms of jaundice are noticed, a doctor should be consulted immediately. Klatskin’s tumor usually increases in size slowly. Early treatment prevents permanent damage to the gallbladder and surrounding organs. If other signs of illness occur, such as noticeable weight loss or problems with bowel movements (e.g. fatty stool), medical advice is required. People who seem tired and drained for no reason should also talk to a doctor.

The Klatskin tumor occurs, among other things, in connection with gallstones, Caroli syndrome and primary sclerosing cholangitis. Patients suffering from any of these diseases should contact the responsible physician. There is also an increased risk of developing a Klatskin tumor after parasitic infections such as Clonorchis sinensi and Opisthorchis viverrini – an immediate diagnosis is indicated. At the latest when pain occurs in other parts of the body, you must go to the family doctor with the symptoms. Other contact persons are the internist or a doctor specializing in diseases of the gallbladder.

As part of the treatment of the Klatskin tumor, an attempt is made to decompress the congested bile ducts. The best method for this is endoscopic retrograde cholangiopancreaticography (ERC), in which the patient receives a stent. Transpapillary drainage is preferred to transcutaneous-transhepatic drainage. So it is necessary to drain the bile to the outside, as it is important for digestion in the intestine.

In advance, it may be necessary to create an initial transhepatic access. In the further course, this is converted into an internal stent, which drains into the duodenum. If surgical removal of the Klatskin tumor is still possible, this will be carried out. This is followed by chemotherapy. If an operation can no longer be performed, radiotherapy or chemotherapy is given.

Since the diagnosis is usually made late, in most cases it is no longer possible to achieve freedom from tumors. Therefore, symptomatic treatment is usually undertaken, the aim of which is to combat jaundice, indigestion and itching.

Unfortunately, the prognosis and prospect of Klatskin’s tumor is very poor. Due to the usually very late diagnosis, only very advanced stages of the disease are recognized and can therefore only be treated inadequately. Because the tumor is then usually very widespread and therefore inoperable, life expectancy is very poor overall, with only a few patients surviving longer than five years after the initial diagnosis. If an operation is still possible, it is very radical in order to remove the tumor as completely as possible. Significant progress has already been made here in recent years.

If this curative and life-prolonging option can no longer be carried out, palliative measures are taken in order to guarantee the patient a higher quality of life. The focus here is on the freedom from pain and activity of those affected. One measure, for example, is splinting the bile ducts to prevent bile congestion and thus liver damage. The patient can also be offered a combination of palliative chemotherapy or radiation therapy for the tumor. In the palliative concept, the focus is on the patient and he can decide which therapies he would like to use.

Because the exact causes of a Klatskin tumor are unknown, no effective preventive measures are available.

Follow-up care follows immediately after the initial treatment of a tumor. Doctors want to prevent recurrence of symptoms and improve life expectancy by starting treatment at an early stage. The Klatskin tumor also belongs to this group of diseases. The type of aftercare depends on whether an operation is possible or not.

If a surgical intervention can no longer be carried out, only palliative aftercare takes place. That means: A long-term treatment begins until the end of life, in which symptoms are alleviated as best as possible. If, on the other hand, an operation promises treatment success, this leads to close follow-up checks. Depending on the progress of tumor formation, follow-up care may be necessary after six weeks.

The rhythm widens with increasing freedom from symptoms. After the fifth year without a new illness, doctors generally recommend follow-up care once a year. Follow-up care usually takes place in the hospital where the first operation was performed. The diagnosis is based on a blood test. Imaging methods, namely computer tomography, magnetic resonance imaging and endoscopic examinations, are usually also used.

A rehabilitation measure can follow the initial intervention. This aims to integrate the patient into everyday life. Psychological and social problems can be addressed. Pain medication can also be set there.

If a Klatskin tumor has been diagnosed, it must be surgically removed as quickly as possible. An early operation is necessary to prevent further enlargement of the carcinoma and thus a negative course. Only the doctor in charge can answer which measures the patient can still take.

In general, the usual preoperative measures should be taken to ensure a complication-free procedure. After the procedure, rest and bed rest apply to the affected person. The diet may have to be changed because the gallbladder has been weakened by the operation. In addition, regular check-ups by the doctor are indicated. There is always a risk that recurrences will form or that the procedure will still cause gallbladder disorders months or years later. Close medical supervision is therefore the most important self-help measure.

If the Klatskin tumor was discovered too late, a therapeutic consultation makes sense. The relatively short life expectancy can come as a shock, which is why psychological support is necessary, but also the help of friends and family members. Symptomatic treatment is still possible and can be supported by those affected by general measures such as a healthy lifestyle and rest.