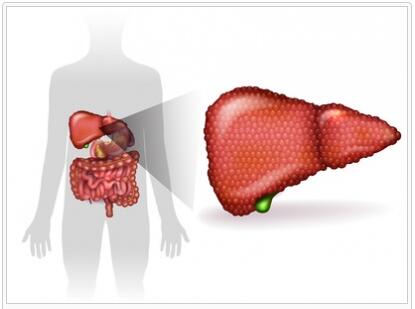 Alcoholic liver disease is a condition that is solely due to excessive consumption of alcohol over a long period of time.

It is characterized by three consecutive damage patterns: First, the liver becomes significantly larger due to the deposition of fat, which usually remains symptom-free. As the disease progresses, the organ becomes inflamed and fatty liver hepatitis develops. This is often accompanied by nausea, pain, and yellowing of the skin.

The remodeling of normal liver cells into a scar structure similar to connective tissue ultimately results in liver cirrhosis, which leads to complete failure of the organ. An estimated 30 to 40 percent of all alcoholics suffer from alcoholic liver disease.

Alcoholic liver disease occurs when the liver has to break down an amount of alcohol over a long period of time that exceeds the limit value that is safe for humans.

This is 40 g of alcohol for men and only 20 g for women, which corresponds to about two or one small beer. Alcohol has a toxic effect on the liver cells, which, with continued excessive consumption, can no longer metabolize it and ultimately lose their functionality.

As a result, the rest of the digestion and the breakdown of metabolic products are severely impaired.

Initially, unspecific symptoms appear in alcoholic liver disease. These include nausea and vomiting , loss of appetite , weight loss , and fatigue . As the disease progresses, pain develops in the area of ​​the upper abdomen, which increases as the disease progresses. The typical yellowing of the skin occurs in later stages. This occurs mainly on the face and arms and is usually associated with increased perspiration.

Further external signs are the characteristic reddening on the palms of the hands and on the soles of the feet. Patients can be recognized by their thin, parchment-like skin on which spider-like vascular changes can be seen. The tongue shines like a varnish red and the face is usually also reddened. Joint stiffness can occur in the area of ​​the fingers, which manifests itself in the permanent flexion of the ring finger and little finger.

As a result of hormonal fluctuations occur in men erectile dysfunction on. Women may experience menstrual cramps or have no periods at all. Finally, alcoholic liver disease causes cirrhosis of the liver , which manifests itself in further weight loss and changes in stool. People vomit blood frequently and suffer from chronic pain. Varicose veins can also form in the esophagus.

Alcoholic liver disease usually goes completely unnoticed in the early stages. Fatty liver manifests itself at most with an occasional feeling of pressure and tension in the right upper abdomen. Also, a liver infection may initially have been even without symptoms.

The first symptoms that occur with alcoholic liver disease are rather unspecific in nature. They include nausea, loss of appetite, weight loss , fatigue and a general decline in performance. Finally, pain in the upper abdomen can also occur. In the further course of the disease there are typical external changes. In addition to the general yellowing of the skin, severe reddening occurs on the palms of the hands and the soles of the feet, spider-like vascular changes become visible and the skin appears thin and parchment-like overall.

The tongue can also shine like a varnish red. In the area of ​​the fingers, joint stiffness can occur, which causes the ring and little fingers in particular to remain permanently bent. Since alcoholic liver disease also affects the hormonal balance, many of the men affected by it also suffer from severe erectile dysfunction . Women can experience menstrual disorders or even stop menstruating altogether.

The cirrhosis heralded by a marked increase in waist circumference, while the limbs are thinner. Due to an increased bleeding tendency it can at this stage Teerstühlen and vomiting blood come. This can be particularly dangerous if varicose veins have formed in the esophagus .

Alcoholic liver disease results from excessive and regular consumption of alcohol. Acute alcohol abuse is associated with disorders of coordination and consciousness. Affected people stagger while walking and have problems with articulation and pronunciation. In addition, the people mostly have memory lapses , so that they can no longer remember the events the following day.

Furthermore, high alcohol levels can lead to respiratory depression, hypoglycaemia and, in the worst case, to a coma. Chronic alcohol consumption leads to cirrhosis of the liver via fatty liver. Cirrhosis of the liver leads to synthesis disorders in the liver; it can no longer produce enough proteins.

As a result, more water is pressed into the abdomen, causing dropsy (ascites). Due to the disturbed liver function, not enough toxins can be eliminated, so that the concentration of the nerve toxin ammonia increases. Liver cirrhosis also increases the risk of developing liver cancer later .

Other possible complications are hernias, kidney disease, and peritonitis . A malignant liver tumor is also possible. If left untreated, the end-stage alcoholic liver disease can lead to a complete breakdown of the liver metabolism and, as a result, to unconsciousness and ultimately death.

When should you see a doctor?

Alcoholic liver damage can develop in three stages. A visit to the doctor would be indicated in the first of the three stages – but this would require an insight into the alcohol problem. This is often not the case at this stage. In addition, fatty liver caused by alcohol remains largely asymptomatic.

If alcohol-toxic liver damage has already occurred, which has led to yellowing of the skin due to fatty liver hepatitis, a doctor’s visit is urgently necessary. At this stage, the liver damage is already evident. However, the liver could still be regenerated by completely and immediate abstinence from alcohol and professional treatment.

If left untreated, alcoholic liver disease ends in cirrhosis of the liver. This consequence of longstanding alcohol abuse leads to death in the end. Withdrawal from alcohol as early as possible in a clinic or a specialized therapy center would be desirable in order to avoid late damage to the liver.

Tarry stools or vomiting blood are acute warning signs of the final stage of alcoholic liver disease. These symptoms of advanced liver cirrhosis require an emergency doctor to be called immediately .

There is no real treatment option for alcoholic liver disease. The only therapy is to eliminate the cause and completely refrain from consuming alcohol.

For this purpose, alcohol withdrawal treatment may be indicated. It can also make sense to reduce any excess weight that may be present and to dispense with drugs that put a strain on the liver. If there are lipid metabolism disorders or diabetes , these must be treated.

If the liver damage has not progressed too far, the liver can completely regenerate itself by renouncing alcohol for life. In the case of liver cirrhosis, this is no longer possible and a liver transplant may be necessary.

In most cases, this disease results in a reduced life expectancy. If the liver has already been damaged by long-term ingestion of alcohol, other internal organs are usually also damaged. The symptoms can, however, be limited by strictly discontinuing alcohol. If treatment is not available, in most cases the liver becomes inflamed and completely destroyed.

Most people have jaundice and a fever . There is also pain in the abdomen and a feeling of fullness. Those affected continue to suffer from a loss of appetite and, as a result, from deficiency symptoms or malnutrition. The patient’s quality of life is significantly reduced by this disease.

The heavy consumption of alcohol often leads to psychological complaints or complications. This can lead to memory lapses. Also, the coordination and concentration are greatly restricted. Causal treatment can only be carried out by discontinuing alcohol. Under certain circumstances, this can lead to a positive course of the disease. The further course depends heavily on the duration of alcohol consumption.

The development of alcoholic liver disease can be completely avoided by moderate and responsible use of alcohol.

Consistent abstinence from alcohol is the most decisive measure for the treatment of alcoholic liver disease . The problem with this disease is its insidious course. As a result, it is usually only recognized and treated at a later stage. The earlier those affected go to an internist , the better the conditions for the rest of their lives. If the person concerned cannot manage to abstain from alcohol, an inpatient withdrawal treatment is urgently recommended.

In addition to giving up alcohol – as the trigger of the disease – other measures can be taken to relieve the body. First of all, a monitored detoxification of the organism would be advisable. The intestines can be cleaned with specially formulated powders.

The consumption of algae – in the form of pellets or capsules – binds metabolic waste products as well as shear metals and thus relieves the liver as part of the body’s own detoxification system. In this context there is also the supply of sufficient fluids , ideally in the form of still mineral water or unsweetened herbal teas.

If the liver is already damaged in its function, this also affects the metabolism and the immune system. The targeted intake of minerals (especially zinc ) and vitamins (especially A and B vitamins ) as well as micronutrients ( selenium ) compensates for deficiency symptoms and an excess acidity in the body and has an anti-inflammatory effect. If you have liver disease, you should also eat a low-fat diet and reduce your excess weight .