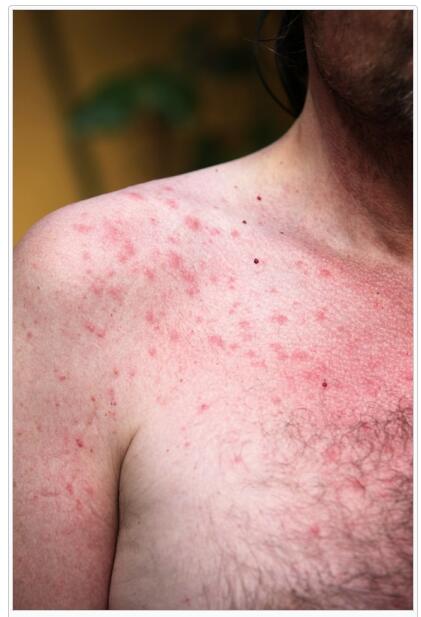 Under the Acne aestivalis a special form of light eruption is understood. It is also known as summer acne or Mallorca acne .

Acne aestivalis is a special form of polymorphic dermatosis (sun allergy). It is also known as Mallorca acne or summer acne. What is meant is a disease of the skin and sebum follicles. In this genetically predisposed acneiform condition, pustules and nodules form on areas of the skin that are exposed to solar radiation.

The name Acne aestivalis can be traced back to the Danish dermatologist Nils Hjorth, who described the disease for the first time in 1972. Particularly affected by Mallorca acne, which has nothing to do with acne or the island of Mallorca, are holiday travelers who expose themselves to UV radiation again after a long period of absence from the sun.

At first, this mainly happened on Mallorca, when it gained importance as a holiday destination for German tourists, which gave rise to the term “Mallorca acne”. Basically, acne aestivalis can occur in any sunny place in the world. The skin problem is particularly common in younger women.

Acne aestivalis is a special form of sun allergy that doctors call polymorphic dermatosis. It shows up in people who are predisposed to blemished or oily skin or acne . Aesthetic acne is caused by excessive skin moisture, which clogs the pores.

Dermatologists suspect that cosmetics containing emulsifiers and fats play a special role. These substances are also found in products that protect against the sun. If the affected people stay in the sun for a long time, for example by sunbathing and using sun protection products or cosmetics that are rich in fats, this leads to the development of acne aestivalis.

So-called free radicals are formed from UV rays . These substances combine with other substances. If they come into contact with cosmetic ingredients such as fatty acids on the skin, substances are formed that damage the tissue. If the person concerned is predisposed accordingly, inflammation occurs on the hair follicles, which becomes noticeable through symptoms that are typical for acne aestivalis.

Sometimes the harmful substances are also formed from the body’s own sebum as a result of a reaction with solar radiation. People who already have acne or who have a tendency to acne are considered to be particularly at risk. They often have a deteriorated skin complexion and Mallorca acne develops.

Aesthetic acne is characterized by typical complaints that occur after intense exposure to the sun. This involves the development of small papules and pustules that are the size of the head of a pin, nodules with a reddened halo and pronounced itching .

Particularly affected areas of the skin are the outside of the upper arms and the cleavage. The face and chest are also frequently affected. In contrast, aestival acne rarely occurs in the abdominal region and on the lower legs. In contrast to classic acne, Mallorca acne does not show any blackheads.

The diagnosis of acne aestivalis can usually be made by an experienced dermatologist based on the characteristic symptoms. When summarizing the medical history, the doctor asks the patient about his stay in the sun and about the use of cosmetic products that contain fat.

To confirm the diagnosis, there is the option of irradiating a specific area of ​​skin with UV-A light. This procedure is called photoprovocation in medicine and triggers the typical skin reactions of Mallorca acne. In addition, there are no blackheads in acne aestivalis, which is a further indication of the skin condition.

The course of acne aestivalis is usually harmless in nature. If the patient consistently avoids the sun, the annoying complaints will go away by themselves after a few days. In addition, by getting used to the sun and increasing skin tan, the affected person can improve the skin problem himself.

Acne aestivalis, also known as Mallorca acne, spring acne or summer acne, usually heals after a few days in healthy adults. Scarring or other complications are extremely rare. However, the disease most often affects adolescents and young adults with oily, oily skin and a tendency to acne vulgaris.

The reason for this is the fact that acne aestivalis does not only result from a combination of UV radiation and fatty sunscreens. In addition, a reaction between UV radiation and the body’s own sebum in the uppermost layers of the skin is possible. If acne vulgaris is accompanied by extremely itchy summer acne, a number of complications can arise.

Aesthetic acne itself causes the formation of mostly itchy pustules and nodules on skin areas that are exposed to the sun. The severe itching causes the patient to scratch the affected areas of the skin. Constant contact with microbially contaminated fingers can make existing acne vulgaris worse.

Especially when purulent acne pustules are scratched open and the contaminated contents come into contact with other skin areas. If superinfections develop in this way, they usually have to be treated with antibiotics. Scratching the pustules can also prevent them from healing without a trace, but rather scars.

When should you go to the doctor?

In many cases, acne aestivalis does not require direct medical treatment. The symptoms usually disappear again when the person concerned shortens or completely stops the light exposure and there are no further complications.

As a rule, the use of sun cream also helps to directly prevent and avoid the symptoms of acne aestivalis. An examination and treatment by the doctor should be carried out if the symptoms do not go away on their own or if they last for a very long time. Most patients also suffer from severe itching or from pustules and papules.

If these symptoms occur, a doctor should be consulted. The treatment itself is relatively simple with the help of creams and ointments and quickly leads to a positive course of the disease. The person concerned should, however, take care of his skin and not expose it to long and strong sunlight. This can prevent burns and other skin diseases. The treatment of acne aestivalis takes place at a dermatologist .

Medical treatment is not always necessary for acne aestivalis. In mild cases, avoiding the sun for several days is considered to be the best option for the skin discomfort. It is also important not to apply any greasy sunscreens, creams and after-sun lotions to the skin and rather to use products that are free from fat.

If the patient suffers from itching, compresses are recommended for cooling. If the symptoms are severe, the doctor may prescribe a cortisone cream or an antihistamine. However, antihistamines are only considered useful if the organism has an allergic reaction to substances that appear when sunlight occurs.

In particularly pronounced cases, performing a special light therapy promises a remedy. With artificial light irradiation, stronger pigmentation can also be achieved. The drugs isotretinoin and tretinone can be used to treat clogged hair follicles and sebum glands. These have an opening effect and relieve skin inflammation.

Acne aestivalis mainly causes discomfort when the person concerned is exposed to direct sunlight. In this case, there is severe reddening of the skin and the appearance of papules. These can lead to feelings of shame and inferiority complexes, so that the patient withdraws.

The quality of life is usually reduced by the subjective feeling of acne aestivalis. It is not uncommon for the skin complaints to be associated with severe and unpleasant itching, which can also lead to sleep problems. In severe cases, scars and wounds can also develop.

Impurities or poor hygiene can also cause infections and inflammation on the skin , which later have to be treated with the help of antibiotics .

In order to avoid the symptoms of acne aestivalis, the person concerned must avoid direct sunlight and is thereby limited in his life. Acute seizures are treated with the help of creams and antihistamines. Furthermore, light therapy can also lead to an improvement in the disease. As a rule, there is no change in life expectancy due to acne aestivalis.

The best way to prevent acne aestivalis is to consistently avoid prolonged sunbathing. If you do not want to do without the sun, it is recommended that you get used to it slowly and begin with short sunbathing, which lasts no longer than five to ten minutes and takes place in the early morning or late afternoon.

With acne aestivalis, aftercare is usually not necessary or possible. The affected person is dependent on purely symptomatic treatment in order to alleviate the symptoms of this disease. Self-healing usually does not occur. The patients are usually dependent on taking medication or on the application of creams that alleviate the symptoms of acne aestivalis.

When taking the medication, care should be taken to ensure that it is taken regularly. Possible interactions with other drugs should also be considered in order to avoid complications. When applying the creams, the skin should be washed beforehand. Likewise, the use of greasy creams should be avoided as far as possible in order to protect the skin.

If the acne aestivalis is caused by an allergic reaction, the triggering substance must be avoided. In some cases, light therapy can also be used to relieve the discomfort. Since acne aestivalis is often associated with psychological complaints or depressive moods, contact with other sufferers can also be helpful. Talking to friends or family can also help to alleviate psychological complaints.

Anyone who suffers from acne aestivalis usually has to struggle with unpleasant consequences after intensive sunbathing in the form of a rash on the neck, upper arms and in the décolleté area. If the rash is inflamed or becomes purulent, a doctor should be seen. Mild forms can be treated with a few simple measures.

To prevent acne aestivalis, sunscreens based on hydro-gel or in water should always be used – sunscreen products with fat and emulsifiers should be avoided. By taking beta-carotene , the skin’s natural sun protection can be strengthened and acne aestivalis can be prevented. Beta-carotene capsules should be taken a few weeks before your vacation. If the acne aestivalis does occur despite good preventive measures, it should be treated with calcium tablets, for example in the form of effervescent tablets, and antiallergic agents.